Pictures Around the World Beautiful, Interesting and Ooo Shiny! Images From Various Places 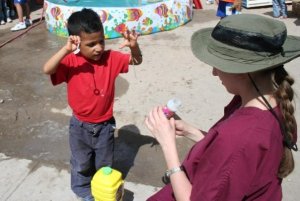 If a picture is worth 1000 words, I probably don’t have to explain what’s going on here. But just in case… I was at an orphanage in Mexico, playing with the kids. I had been given power to control the bubble solution stock (big yellow bottle). The kids had their own small bubble wands, and when they needed refills, they came to me. There was limited stock and I was trying to help them be conservative. This little boy was doing his best to convince me that he needed more anyway. However, I didn’t know any Spanish and he didn’t know any English, so we had no clue what each other was saying. Yet we still communicated all this without language.

Have you ever run into a situation like this, where someone you try to talk to doesn’t speak your language? Yep, it even occurs right here in the USA. So what do we do? Our basic tendency when we don’t feel understood is to speak louder or slower, hoping that if we enunciate better, people will understand us. But when someone doesn’t know your language at all, it just makes you look silly.

In my travels, I’ve learned that one old speaker’s addage still holds true internationally. “Communication is 20% what you say, and 80% how you say it.” People pay more attention to tone and body language than they do actual words, so learning to capitalize on that has allowed me to communicate with many people worldwide who don’t share a common language!

How about trying some clear body language? When I tried to ask an Indonesion kid the word for “rain”, I pointed to the ocean nearby (water), then to the sky (clouds), and made a motion like raindrops with my fingertips. He knew exactly what I wanted then, and gladly taught me that word as well as several others. Children in India often beg by putting their hands to their mouths, imitating eating, then put their hand out to you, hoping you will fill it. Facial expressions also are clear indicators, as long as you emphasize your feelings well. Smiles are known worldwide!

How could you indicate a question or statement using only body language and facial expressions? I’d love to hear your creative ideas!